Ancient Egypt enjoyed the pagan worship of around 2000 Egyptian deities over 3000 years. Each Egyptian deity represented an aspect of Egyptian life such as the underworld, the sun, or fertility.

The ancient Egyptians believed that nine Egyptian sun gods were born at Heliopolis. Their cult of worship referred to them as the ‘divine family’ of the Ennead of Heliopolis. These gods and goddesses were Osiris, Isis, Set, Atum (Ra), Geb, Nephthys, Shu, Nut, and Tefnut. 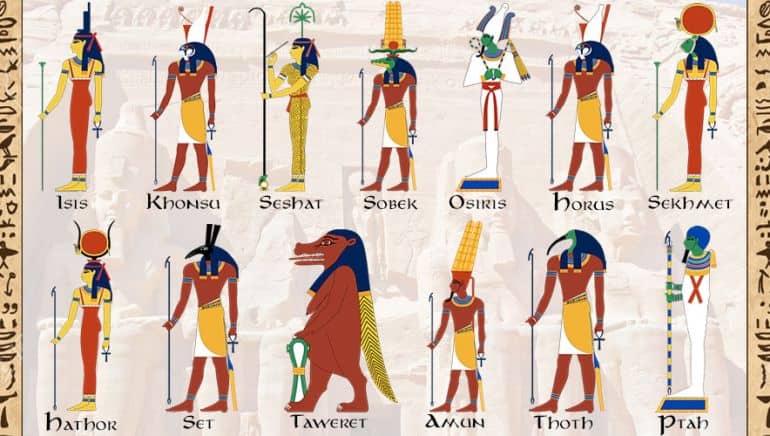 Egyptian Pharaohs were seen as living gods and deities. They were responsible for the well-being of the people. The Pharaoh deities or kings were believed to be all powerful and were perceived as being in control of the fertilizing floods of the Nile. After death, many were mummified and buried in elaborate tombs that were illustrated with hieroglyphics.

Only once was only one god worshipped in the entire history of Ancient Egypt. During his reign Pharaoh Akhenaten demanded worship only the sun god Aten. All other deities were forbidden.

Akhenaten is the only pharaoh not to be considered a deity. After Akhenaten’s 17 year reign as pharaoh, his young son Tutankhamun re-established worship of the old deities. Over time the Egyptians covered up virtually all trace of Akhenaten. 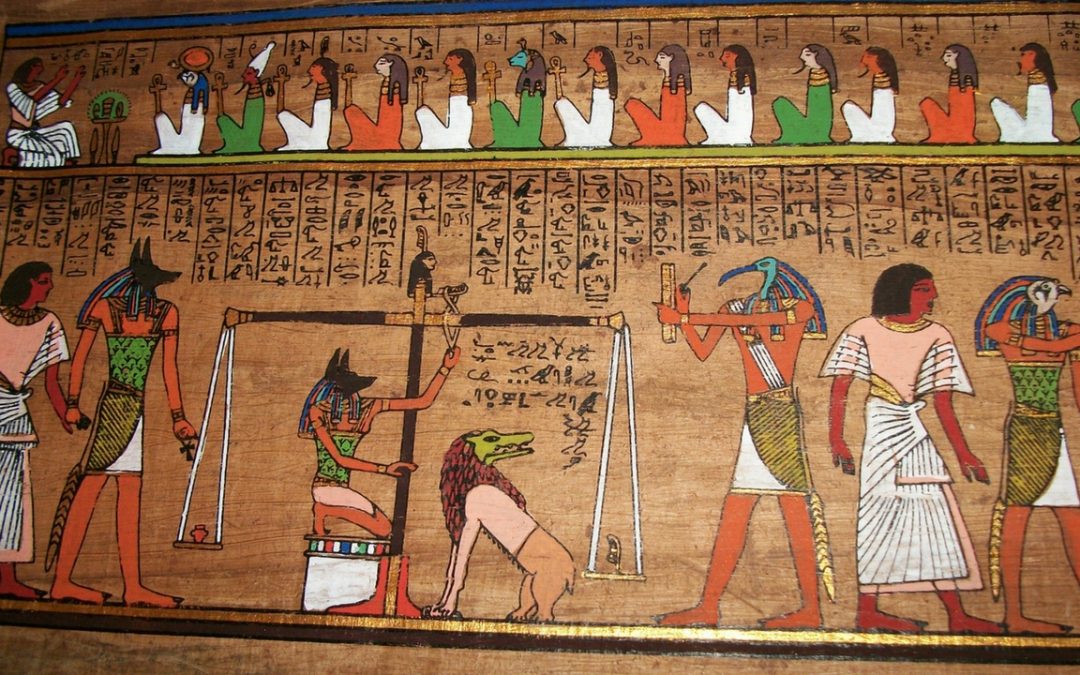 Ancient Egypt had many deities that many resonate with today. Their gods and goddesses are today more accurately seen as divine representations of divine principles. Some of the major Egyptian deities are explained below.

Amon was the king of the gods and of the air. Amon was worshipped locally in the southern city of Thebes before rising to national importance in the New Kingdom.

Amon became the most powerful deity in Egypt in a form merged with Ra. This position lasted for most of the New Kingdom.

Amon was seen as a man wearing a crown with two vertical plumes. His animal symbols were the ram and the goose. The word Amon means ‘hidden one’.

Today the temple complex at Karnak is devoted to Amon-Re. It is one of the most visited monuments in Egypt.

Ra was the first pharaoh of the world in early Egypt when the gods still inhabited Egypt. Ra is their original sun god and he had a human body with the head of a hawk.

The ancient Egyptians believed that every day Ra sailed across the sky in a boat. He then travelled through the underworld each night to defeat the snake god Apophis in order to rise again in the dawn. Ra’s cult was centred in Heliopolis.

Seth was the god of chaos, violence, deserts, and storms. In the Osiris myth, Seth was the murderer of Osiris.

Seth is often depicted as an animal or as a human with the head of an unknown animal. Seth has a human or doglike body with long snout and long ears squared at the tips. 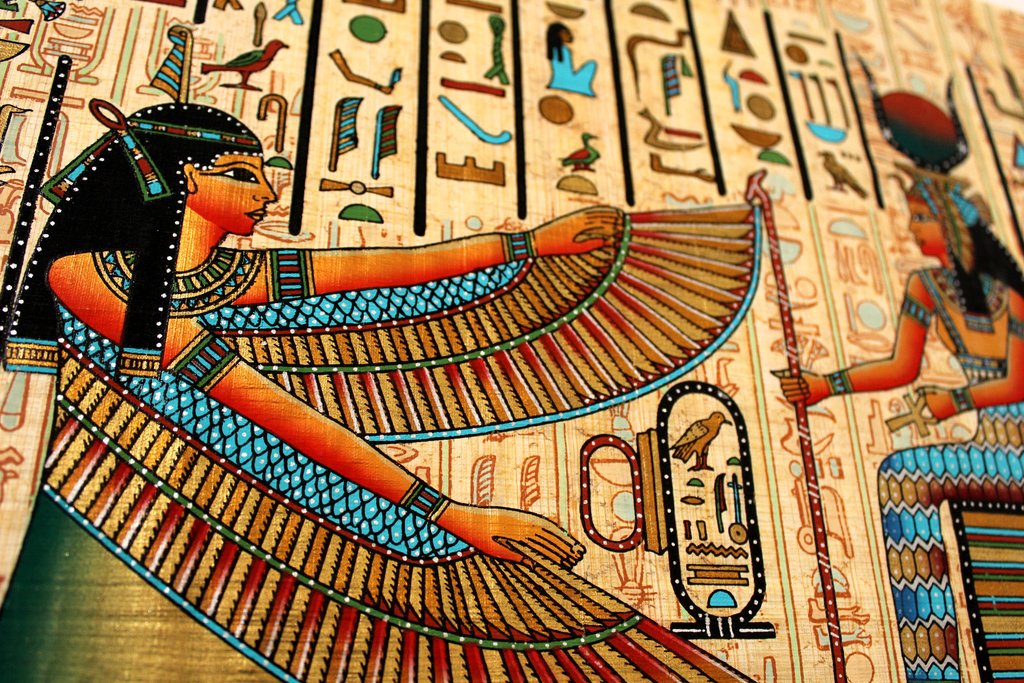 Isis is the goddess of magic. Her origins are obscure and she is depicted as a beautiful woman with multi-coloured wings. The Egyptians saw Isis as the embodiment of their traditional virtues of a wife and mother.

As the wife of Osiris, Isis was also associated with the rites for the dead. Her maternal care was often depicted as extending to the dead in the underworld.

Isis was one of the last of the ancient Egyptian gods to still be worshipped. She was identified as the Greek goddess Aphrodite and her cult spread as far as Great Britain and Afghanistan. 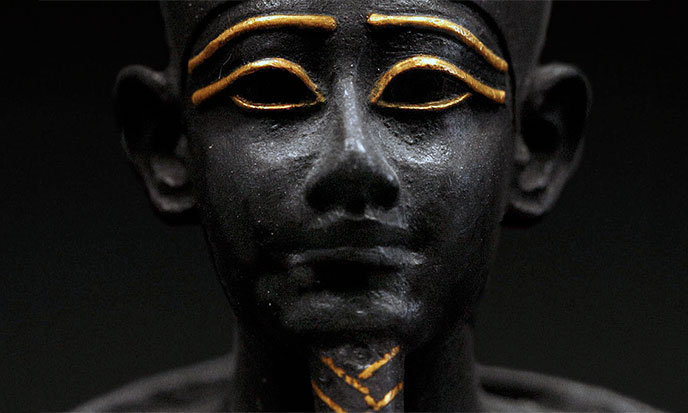 Osiris was the Egyptian god of the underworld. He was also their god of death, resurrection, and the cycle of the Nile floods.

Osiris was a king of Egypt who was murdered and dismembered by his brother Seth. Osiris’ wife Isis reassembled his body and resurrected him following his murder.

Horus is depicted as a falcon or as a man with a falcon’s head. Horus was a sky god associated with war and hunting. He was also the embodiment of the divine kingship.

In Egyptian mythology Horus was magically conceived by Isis after the murder of Osiris by his brother Seth. Horus was raised to avenge his father’s murder.

The ancient Egyptians believed that Horus lost his left eye fighting with Seth. His eye was magically healed by Thoth. As the right and left eyes of Horus were associated with the sun and the moon the loss and restoration of his left eye was used to explain the phases of the moon.

The goddess Hathor embodied motherhood and fertility. The ancient Egyptians believed that she protected women in childbirth. Hathor was usually depicted as a cow or as a woman with the head or ears of a cow.

She was also known as ‘the lady of the west.’ Tombs were usually constructed on the west bank of the Nile. She would welcome the setting sun every night and people believed that they would enter the afterlife in the same way. 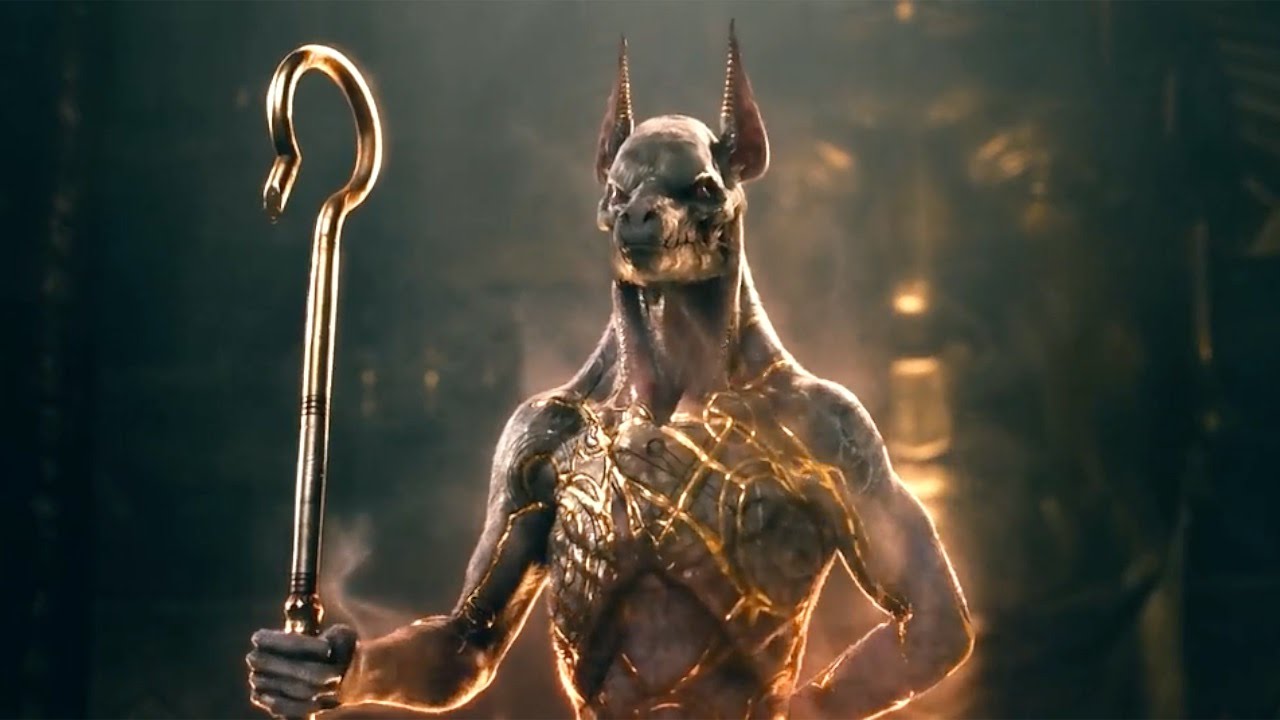 Anubis was usually represented as a jackal or as a man with the head of a jackal. He was associated with the care of the dead and funerary practices. Egyptians observed jackals scavenging around cemeteries and associated this with death and funerals.

Anubis was considered the principal god of the dead in the Old Kingdom. This was before Osiris rose to prominence as the lord of the underworld.

Thoth is the god of writing and wisdom. He invented language and the hieroglyphic script and to serve as a scribe and adviser for the gods. Thoth also possessed sacred knowledge of magic and other secrets not available to the other Egyptian gods.

Thoth is depicted as a man with the head of an ibis or as a baboon or sacred ibis. In underworld scenes, Thoth is seen as weighing the hearts of the deceased before reporting his verdict to Osiris.

The cat goddess Bastet was originally represented as a woman with the head of a lion or a wild cat. Later on she took the less ferocious form of a domestic seated cat, sometimes wearing rings in her ears or nose.

Bastet was associated with the Greek goddess Artemis during the Ptolemaic period. Artemis was seen as the divine hunter and goddess of the moon.