There is something truly miraculous about Native American Folklore. These oral traditions always leave us valuable knowledge and wisdom. American Indian creation stories explain through storytelling how the world came into existence, and they feature characters that are usually animals, powerful energies, or human beings.

American Indian folklore consists of creation myths which have been orally narrated by the people to their upcoming generations. These stories differ from tribal nation to nation. The stories reflect the beliefs of the Native Americans about the existence and creation of the world.

Native American folklore is deeply rooted in nature. The myths and stories are rich with the natural symbolism of the seasons, the elements, plants and animals, and of the cosmos. Different tribes across North America share many myths which they have woven into unique stories.

In Native American Folklore there is a universal and omniscient Great Spirit. The tribes hear the Great Spirit in every wind, see him in every cloud, and adore him in every place that inspires awe. Native Americans share a connection to the Earth and its landscapes as well as a belief in other worlds underground and across space and time. Their tales include diverse creation narratives, visits to other realities, and collective memories of ancient ancestors. 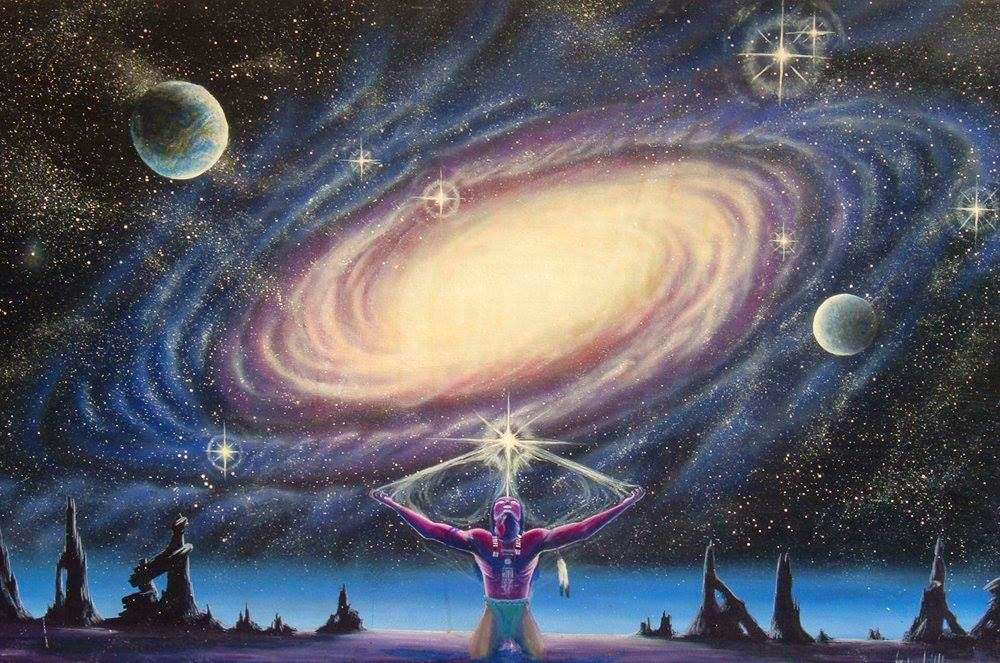 There is a close and symbiotic relationship between human beings and animals in Native American Folklore. Common themes are shapeshifting between animal and human forms, and the marriage between people and different species.

Most Native North American folklore carries important messages and wisdom. Some stories use light-hearted humour to entertain and engage the audience. There tales explore common themes including love and friendship, growing up and becoming a warrior, domestic conflict, illness and death.

All tribes have a strong sense of a single creative life-force that flows through everything. This includes every human, animal, tree and grain of sand. From this universal life-force emanates all individual spirits and personifications of the divine.

Animals play a major role played in Native American folklore. Animals often speak to humans and assist them. Most tribes connect with power animals and animal spirits. They also see individual wolves, for example, as expressions or extensions of a spiritual archetype and power. 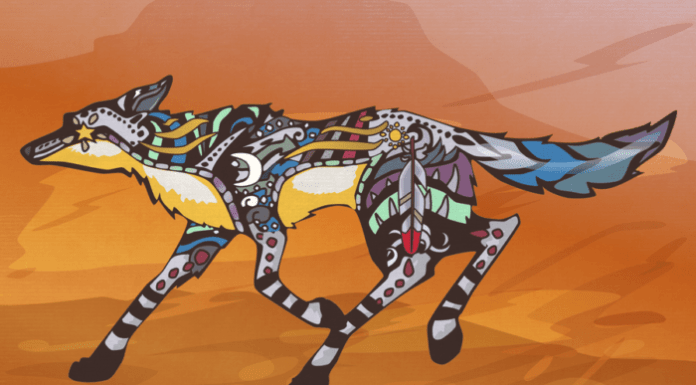 Native Americans see the world as having four directions (north, east, south and west). From these come the four winds. Native American folklore explores the powers ascribed to the four directions. These are often represented by particular colours or by animals. The Four Directions have to be in balance for all to be well with the world. A fifth direction may be invoked where four brothers represent the outer directions and their sister the centre.

The Lakota legend of the White Buffalo Calf Woman is over 2,000 years old. The story starts when the Lakota chief sent out two scouts to hunt for food. While the young men travelled they approached a beautiful young woman dressed in white buck skin with dark hair, eyes, and skin. 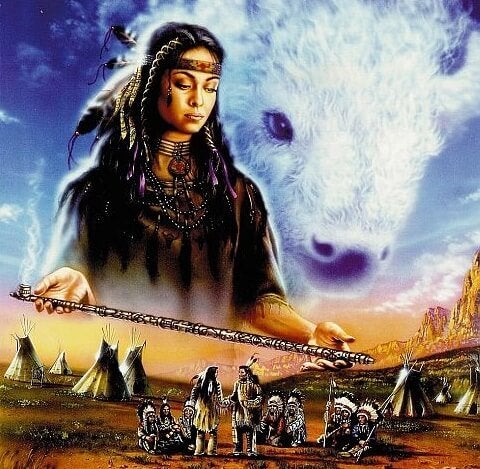 One of the scouts was possessed by lust and approached her. He wanted the woman as a wife and he ignored his comrade’s warning that she was a holy woman. As he embraced the woman, a white cloud enveloped them both to reveal only the mysterious woman and a pile of bones. The holy woman looked into the second scout’s heart and saw his intentions as pure. She spoke in Lakota to him that he would come to no harm and he promised to do what she instructed. He returned to his tribe and they prepared a feast for her arrival.

Buffalo Calf Woman taught the Lakota seven sacred ceremonies and gave them the sacred ceremonial pipe. She also taught them how to revere nature and pray correctly. The pipe is extremely important in Lakota ritual. It is the symbolic means of making an exchange between humanity and the spirit world. Hence when smoked it is always offered to the Four Directions. The smoke is regarded as rising up to the spirit world.

The Lakota know her as a wise and magical woman who will reunite all people on earth. They feel that her return will also restore humanity’s balance with nature.

Other Stories from Native American Tribes

Native American myths include stories of creation and heroic journeys. They are particularly rich in stories about tricksters including Coyote and Iktomi is a spider-trickster spirit in Lakota mythology. The trickster is used to show the qualities of early human cultural and psychological development of civilisation that cause problems. He is an expression of the least developed stage of life which is dominated by the physical desires of lust, greed, and manipulation. 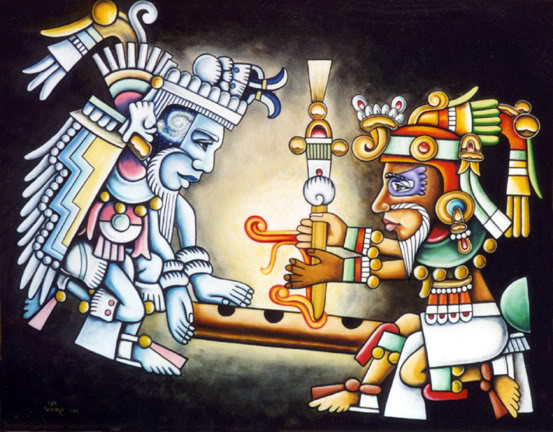 An Iroquois tale tells of Tepeu and Gucumatz, who sat together and created many different things. These included the earth, the stars, and the oceans. Later they were helped by Coyote, Crow, and a few other creatures to create four two-legged beings who became the ancestors of the Iroquois people.

In a Sioux tale, a new world was created by a creator who was displeased with the people in the old one. He sang many songs to bring rain and catastrophic floods until all but Kangi the crow survived. Kangi pleaded with the Great Spirit to make him a new place to rest. So the creator created new species, including Turtle, who brought mud from under the sea to create the land. From his huge pipe bag, the creator brought out the land animals and used the mud to create the shapes of men and women. 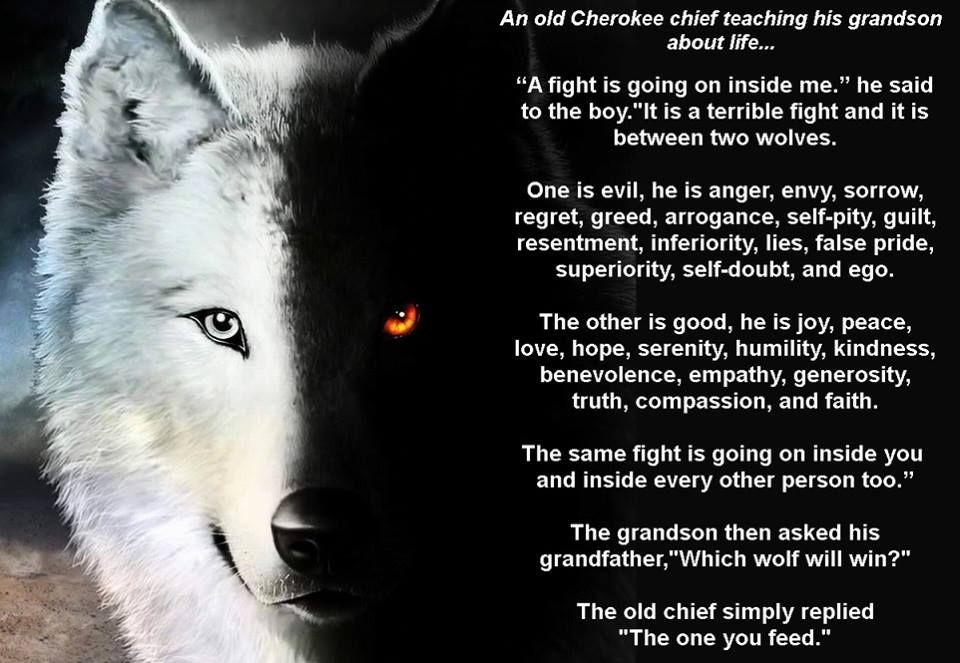 An old Cherokee told his grandson about a battle that goes on inside people. The battle is between two wolves inside us all. One is Evil. The other is good. The grandson then asked the question ‘’which wolf wins?’’ The old Cherokee simply replied, “The one you feed.” Both wolves will always be there and this battle applies to our emotions, behaviour, habits, and every other aspect of our life.