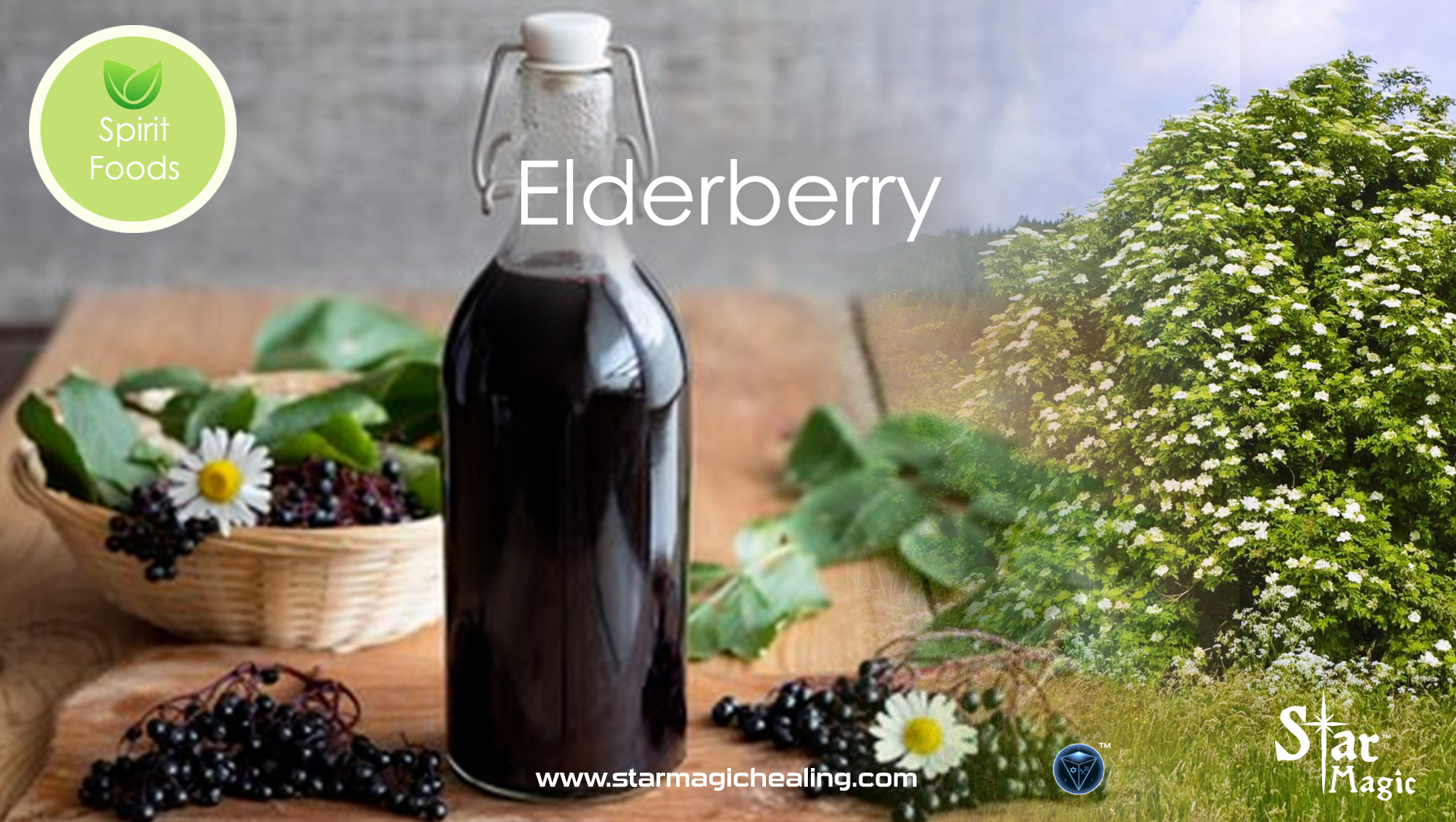 Elderberries are the fruit of the Elder tree (Sambucus). Elder trees grow up to 15m tall and live for up to 60 years. The Elder tree grows clusters of small white elderflowers and bunches of small blue or black elderberries.

Archaeologists have uncovered evidence that the Recipes for elderberry-based medications date as far back as Ancient Egypt where some Ancient Egyptians even had the tincture buried with them. There is also archaeological evidence that elderberry may have been cultivated by prehistoric man.

Elderberries possess antiviral and anti-inflammatory properties and have long been associated with healing. Over the centuries, elderberry has been used to treat colds, flu, fever, burns, cuts, and more than 70 other maladies ranging from toothache to the plague.

Native Americans and European herbalists have long used elderberries for boosting the immune system to help the body fight off colds, flu, and other respiratory infections.
Elder is sacred to many goddess traditions including Venus and Holle. Pagans believed that the spirit which inhabits the Elder tree is the Elder Mother who holds the power to work her magic in this world.

Pagans believed it to remove harmful spells and induce vivid dreams. Leaves of the tree were once hung in doorways and windows to guard against evil.

Elderberries and the flowers of the Elder tree are packed with antioxidants and vitamins that may boost your immune system, relieve colds, and help to fight the flu. Elderberries can help tame inflammation, lessen stress, and help protect your heart.

Elderberries contain high levels of flavonoids and contain anti-inflammatory and antioxidant properties. These help to protect healthy cells from harmful free radicals that play a role in skin problems.

Elderberries also contain high levels of vitamin A and are used to soothe the skin, help ease the appearance of age spots, and prevent or lessen wrinkles.

Elderberries have also been used as a treatment for joint and muscle pain, headaches, fever, epilepsy, stress, kidney problems, some lung infections, constipation and HIV/AIDS. More scientific research is required in these areas and much evidence is still inconclusive.

Elderberry is a potently magical fruit that has been used for healing and blessings. Elderberries and the elder tree carry protective energies and are used to ward against negative energies.

Elderberry is known for its ability to stimulate vivid dreaming. It is believed that falling asleep under an elder tree inspires dreams of the Celtic faerie lands.

Elderberry has the power to bridge the divide between the physical and the spiritual realm. It represents Holle who is a Pagan Goddess of Death and Regeneration. She protects the life cycle and those transitioning into death and the underworld.

Some believe that the elder tree is inhabited by a tree dryad. When treated with honour and respect this dryad is seen as a kind and benevolent spirit who protects those who care for the elder tree.

Dried Elderberries are prepared to make a delicious tea or syrup. They can also be used in herbal remedies or added to baked goods including muffins and pancakes.

You can connect with this healing fruit by picking a tub full of ripe elderberries in the British countryside in late summer and early autumn. Never consume raw berries as they can induce vomiting and diarrhoea.

It is easy to make your own flu busting elderberry cordial. Put the elderberries in a pan and add water to just cover the fruit. Boil for 15 minutes and then strain the contents through muslin. Then add a squeeze of lemon juice and 500g of sugar to each litre of liquid. Boil the mixture again before allowing the cordial to cool and dilute to taste.