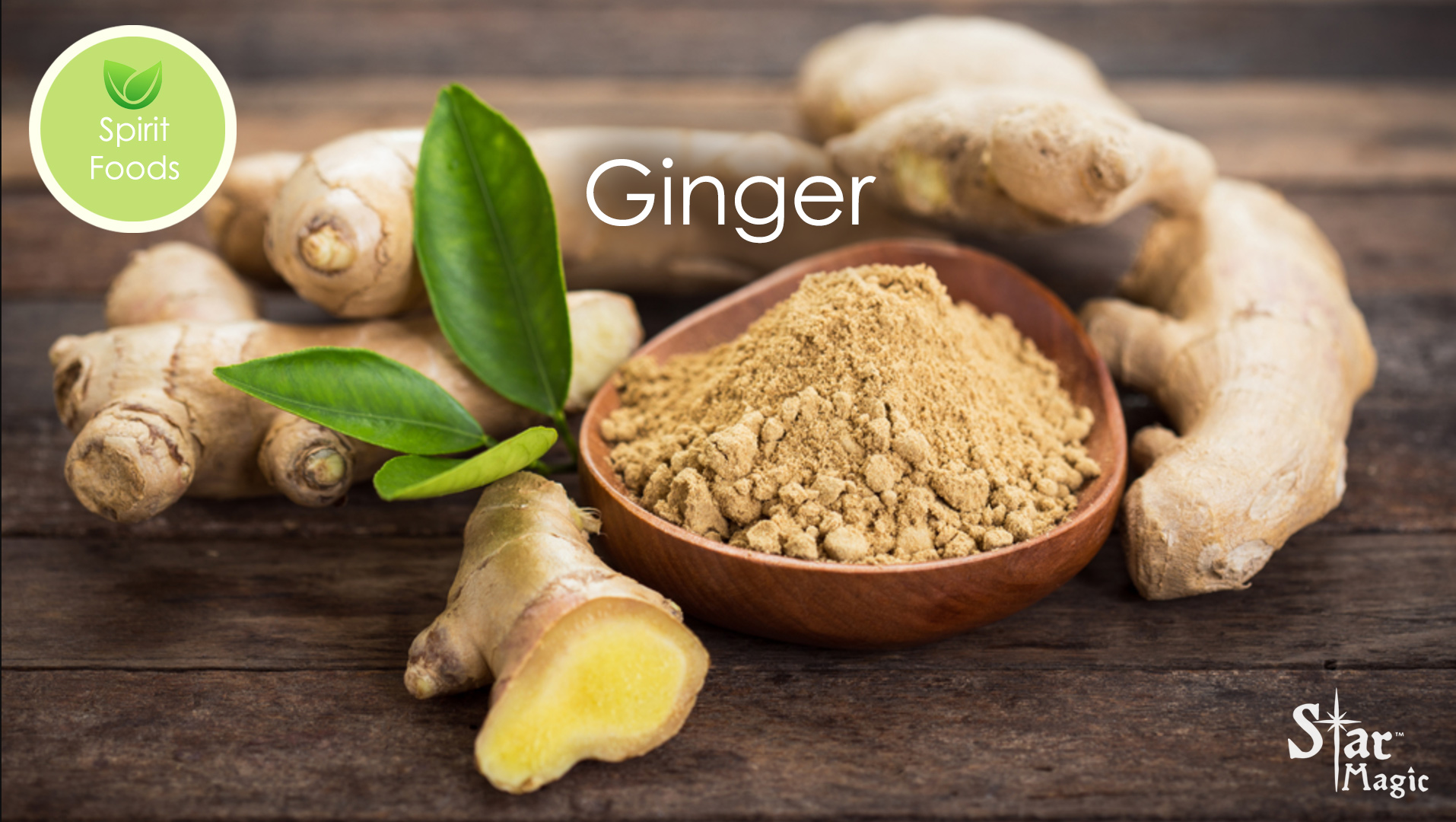 Ginger originated from the southern parts of ancient China. It gained popularity through India and the Middle East.

In the 1st century, it made its way to Europe when the ancient Romans traded with India. It has a very rich history. The Indians and ancient Chinese used the root of ginger as a tonic to treat common ailments. Ginger was considered a luxury more than 5,000 years ago, half a kilo of ginger was the same price as a sheep! The Romans valued ginger as a strong symbol of strength and fertility. It is believed that Alexander the Great was the first to introduce it to the Western World.

Today, India is the greatest producer of ginger in the world. The name “ginger” has its root in Sanskrit from the word “srngaveram” which means “horn body” to describe its root. That in itself is a very sacred name for a sacred plant.

It grows with white and pink buds which bloom into yellow flowers.

In England, physicians would have their patients smoke finely shredded ginger through a pipe to calm patients down, combat violent tempers and reduce hysteria.

Ginger has been known to be a magic medicine, in which it was chewed up and spat on to the sick or wounded for mental and physical cures.

Ginger is best known for relieving nausea. It has been used for curing an upset stomach and vomiting. It is a wonderful aid to relieve morning sickness in pregnancy.

Ginger tea induces sweating, which removes toxins from the body. This helps with the detoxification of diseases and the common cold and flu.

Ginger is known to boost bone health and relieve joint pain associated with arthritis. It contains gingerol, which has anti-inflammatory properties. Gingerol has been directly associated with improvements in osteoarthritis, joint inflammation, and rheumatoid arthritis.

Ginger is a known aphrodisiac which has been used for years to arouse desire and enhance sexual activity. It has a unique scent that helps increase arousal, increase fertility and sexual connection.

Ginger is loaded with antioxidants, compounds that prevent stress and damage to your body’s DNA. They may help your body fight off chronic diseases like high blood pressure, cancer, heart disease, and diseases of the lungs, plus promote healthy ageing.

Ginger has a very potent stimulating and invigorating effect on the mind effective for stress, anxiety, depression, mental exhaustion, and restlessness. It is one of the best plants to raise your vibration.

Gingers spicy and sweet aroma allows one to be mentally energised, it awakens parts of your spirit that has been dormant. Use ginger regularly to clear negativity and to clear the pathway to your highest potential.

It stimulates fire in the belly, many believe it can conjure the powers of Mars and the Sun to raise the chi.

It helps you let go of resentment and jealousy, bringing you to a place of contentment and balance. Place ginger on your tongue the next time you are meditating on your desire then start chewing it. Keep visualising your intention and finally spit it out.

Juice fresh ginger and take as a revitalising ginger shot or add it with other vegetables for a super zingy fresh juice.

Drink ginger tea first thing in the morning or before meals to stimulate the digestive fire.

Grate some ginger into any baking recipe for added flavour.

Use powdered ginger to meals.

Sprinkle powered ginger root in your purse or pocket to attract more money.

Place a ginger compress on an area of your skin that is inflamed or irritated.

Keep or plant Ginger Root to attract prosperity in the house.

Chew some root and spit it on the source of the illness to banish it, it may be on a part of the body or a photograph of the sick person.

How to be a STAR SEED on Earth & Connect with Your Galactic Origins. CODE INSIDE Video - Spirituality. The Human Experience. Raising Kids and Loving Yourself
error: