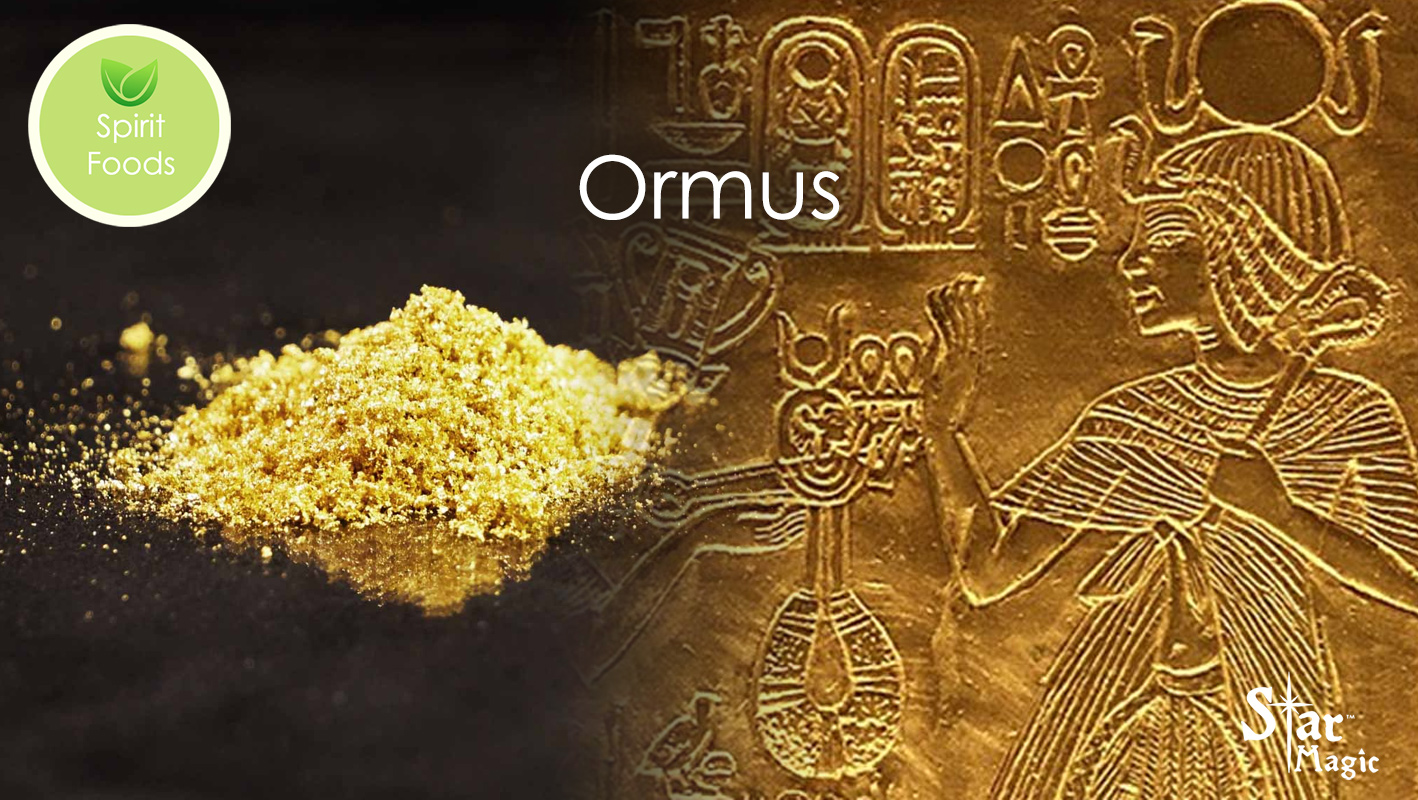 Ancient civilisations viewed Ormus as the ancient elixir of life. They called it the Gold of the Gods, the Philosopher’s Stone, and the Fruit of the Tree of Life.

The ancients believed that Ormus would maintain eternal youth, enable extraordinary life-spans, and cure all diseases. This elixir of life was sought by alchemists for many centuries after it was lost.

Ormus is linked to Biblical and ancient Egyptian alchemy. Some believe that Ormus was found in the King’s Chamber of the Great Pyramid of Giza in Egypt. David Hudson rediscovered Ormus in 1975 while conducting an analysis of natural resources on one of his farms in Arizona. When he used Ormus he felt it was rejuvenating and repairing his body.

Ormus is the same as ORME which stands for Orbitally Rearranged Monoatomic Elements. Ormus is also known as Monatomic Gold, White Powder Gold or White Gold. When processed its appearance and consistency is similar to talcum powder.

Ormus is a complex concentrate of chemical elements including gold. It also contains many other metals including platinum, rhodium, iridium, and copper. These metals are said to exist in the monoatomic state, or m-state. This is an unusually high-spin state of matter where metals remain as single atoms or molecules.

M-state elements are naturally abundant in seawater. The pure sea salt in seawater is seen as responsible for these rare, high-spin particles. Ormus is a concentrated cocktail of minerals that are dissolved in seawater from rocks and earth. Ormus properties can be felt also by connecting with most rocks and trees.

Several researchers have independently seen Ormus elements embedded in the structure of DNA of plants, animals and humans including our heart, brain, kidneys, liver, lungs, skin, nails, hair, and blood. Ormus and all monatomic minerals are not addictive.

Many methods are used to obtain Ormus elements. Barry Carter has shown that Ormus can be made via the magnetic trap method, the wet method, and the lye fusion method. With know-how and practice, it is easy for anyone to combine ocean water, lye water, and distilled water in their own home.

Monatomic molecules are present in high quantities in organic matter. When these elements are isolated to their constituents through alchemical processes, they are believed to work in your body at the quantum level. They repair and regenerate your cellular structure and helping your body to heal.

All monatomic substances are excellent for repairing the cumulative damage of life in a toxic society at all levels of your being. Ormus is not for the faint-hearted. It can put you through a baptism of fire as you release layer upon layer of physical, emotional and mental blockages.

People have experienced huge gains in their physical fitness, health and vitality. Others have significant relief of stress and anxiety after taking Ormus with an elevation of emotional health as connection with others.

Monatomic elixirs help repair the flow of energy in your body by increasing cell conductivity. This is so your body is able to utilize more nutrients and increase the production of necessary cells and tissue. Your positive emotions become stronger, your chakras become more open, and your aura grows more powerful.

Some researchers believe the feeling of increased mental energy comes from the elements, including gold and platinum. When reduced to a monatomic state these increase the efficiency and synthesis of the brain and the body.

Monatomic elements including Ormus can help you live your life with more purpose. You become more conscious as you feel more energy and connection. The molecules are believed to respond to intent and so help you to interact with the world in a more conscious way.

With continued use of Ormus, you experience your physical, emotional, mental, and spiritual aspects aligning and resonating as one higher frequency. You also become super-conscious and feel a vibration or buzzing through your entire light body. This is also known as your etheric or subtle body.

Your body aligns with a different plane of consciousness as your DNA evolves and your higher dimensional DNA activates. Also, you will experience more synchronicities and a closer connection with your guides and angels.

Errors in DNA are corrected and you can unlock/activate ‘junk’ DNA. Ormus is a lubricant for your physical, etheric and astral bodies. It is excellent for use with multi-sensory energy healing, spiritual work and earth ascension work. You sense your light body and connection with others and the divine.

Ormus enhances and amplifies your etheric body, cleanses your third eye, enhances extra-sensory-perception, and also improves the effectiveness of meditation and energy healing. Ormus is great for aligning your entire being with your divine blueprint. Ormus increases sensitivity to energy and crystals. It works well with crystal healing, channelling, remote viewing and astral projection (quantum teleportation).

Ormus is very concentrated so start with just one full dropper, taken sublingually before swallowing, twice per day. Or start with 250mg (half a daily dose) of the white powder. One or two doses of Ormus or White Powder daily are ample. Take more if you are on a physical and spiritual detox.

In its powdered form, Ormus is usually ingested sublingually or under the tongue. This is so it goes straight into the bloodstream and your entire body including your brain. In its liquid state, White Gold can be drunk as a potion or applied topically to the skin. For maximum absorption take Ormus in the morning on an empty stomach. A second dosage is best taken 15 minutes prior to meditation, yoga, channelling, energy healing, or martial arts where the focus is required. It is also great for being tuned in, calm and relaxed at work.

You can try Ormus or White Powder in your coffee or tea, mix with water and lemon, or add to your food. Ormus works well with colloidal silver and L-Theanine, a nootropic amino acid found in green tea.